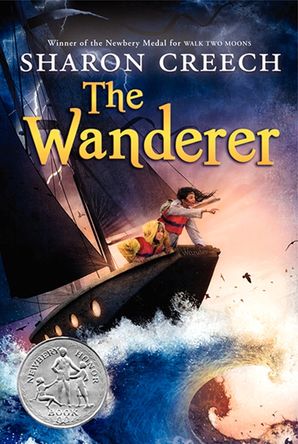 “A beautifully written and imaginatively constructed novel that speaks to the power of survival and the delicacy of grief.” —School Library Journal (starred review)

This acclaimed bestselling Newbery Honor Book from multi-award-winning author Sharon Creech is a classic and moving story of adventure, self-discovery, and one girl's independence.

Thirteen-year-old Sophie hears the sea calling, promising adventure and a chance for discovery as she sets sail for England with her three uncles and two cousins. Sophie’s cousin Cody isn’t so sure he has the strength to prove himself to the crew and to his father.

Through Sophie’s and Cody’s travel logs, we hear stories of the past and the daily challenges of surviving at sea as The Wanderer sails toward its destination—and its passengers search for their places in the world.

“Sophie is a quietly luminous heroine, and readers will rejoice in her voyage.” —BCCB (starred review)

The Bulletin of the Center for Children’s Books (starred review)

“Sophie is a quietly luminous heroine, and readers will rejoice in her voyage.”

“A beautifully written and imaginatively constructed novel that speaks to the power of survival and the delicacy of grief.”

The Bulletin of the Center for Children’s Books (starred review)

“Sophie is a quietly luminous heroine, and readers will rejoice in her voyage.”

“A beautifully written and imaginatively constructed novel that speaks to the power of survival and the delicacy of grief.”

ALA Best Fiction for Young Adults

ALA Popular Paperbacks for Young Adults

During the year prior to our move back to the States from Europe, we crossed the Atlantic twelve times: my mother was ill; my husband was looking for a job; my mother died. Back and forth we went, and during one of these crossings, I felt like such a wanderer, endlessly roaming, yearning for home. The title for a book—The Wanderer—came to mind.

Simultaneously, I had the frame of a story in mind which would match that title. When my daughter Karin graduated from college, she and six friends (all male) sailed across the ocean from Connecticut to Ireland. Along the way, Karin kept a journal, recording the journey in writing and in drawings. I was reluctant to see her go—worried about her safety—but she reassured me as to all the safety provisions aboard. Midway through their trip, they were able to relay a message via a ham radio operator that all was well. I relaxed a bit. Then, two weeks later, when they did finally arrive in Ireland, Karin phoned. “Mom!” she said. “We almost died!” Shortly after they’d relayed the “all-safe” message, they encountered a gale, much like the one in the book: it broke their booms, ripped their sails, and knocked out all their communications’ equipment. So: out of all that came The Wanderer.

I started with the idea of a gutsy girl on board a sailboat with all men. They would follow the same route my daughter had taken, and they would encounter a storm. But the girl in the book, Sophie, is not my daughter. Sophie had no sooner started talking when I realized she had her own secrets, her own worries. Using a second narrator, a boy (Cody), evolved because it seemed he would make a good contrast to Sophie, and it would be interesting to see two different reactions to life on board the boat. I think I also had in mind the question so many boy readers used to ask me: When are you going to use a boy as a main character?

The first two Bompie stories in The Wanderer (Bompie and the car; Bompie and the train) are my own father’s stories. The rest are imagined. Sophie is named after a young girl we know in England, and Cody is named after a student who came to one of my talks (I think it was in Nashville). Bompie’s name came from my sister-in-law (that’s what she called her grandfather)—but one of the strangest ironies is that after the book was published and my sister-in-law read it, she told me that, like Bompie in the book, her Bompie’s wife’s name was Margaret, and his son’s name was Mo. (I hadn’t known that before!)